Idioms in English help you speak expressive English. Here are 10 New Year idioms that express new beginnings. I am sure you would love to try them in your everyday conversation and sound more fluent in spoken English. Improve your English speaking and learn advanced English with our carefully curated English lessons in 2023. #idioms #advancedenglish #englishlesson

As we venture into a new year, it is

very important for us to want to improve, to

become a better and a newer version of ourselves.

And that is why in this video today, I’m going

to show you some really nice New Year idioms.

Because if you know how to to use New

Year idioms nicely, then you can talk about how

you can become a better, newer version of yourself.

So let’s go into the new year.

As we look at New Year idioms, the

first idiom, or a phrase that you can

use is nothing ventured, nothing gained.

Venture is basically this action of doing

something new, getting into an adventure, right?

So if you venture, if you do

something new, you can gain something.

So what does this expression mean?

Logically, it means that you have to take a risk.

Because without taking a bit of risk, you

Someone once told me that if I keep

doing the same thing over and over again,

I won’t get different results or better results.

So do you want to be a new person?

Do you want to be a new version of you?

Then you want to venture and

do something new to gain more?

In a sentence, you could say, I decided to write a

book, even though I’d never formally written a book before.

After all, nothing ventured, nothing gained.

In the new year, I made

this commitment to do something new.

I ventured for something different.

Let’s look at another idiom, which

is to break new ground.

Now, what does this mean?

As you are entering into the new

This feeling of newness has to be there.

But when can it be there?

When you do something revolutionary.

Okay, so when you are using this phrase

to break new ground, it’s a way of

saying that you are feeling new because something

Now, the word revolutionary means that something

has improved drastically for the better. Okay?

Now I want to talk about a movie which is

So there was one movie where the director’s

film this movie, it broke new ground. Why?

Because it is the first film that has

been made in a very different way.

Let me give you an example.

How many of you watched this movie called Searching?

Now, the director did something really different.

He broke new ground. Why?

Because this entire movie was shot on

The traditional cameras that are normally used while

making a movie were not even used.

And it gave really great results.

I don’t think any movie has ever been made that way.

So what really happened with this movie?

The director created something new, something

revolutionary to create something beautiful that

we have never seen before.

And that is breaking new ground.

What new ground are you going to be breaking?

Let me know in the comments below.

Well, you’re wondering what’s this all about, right?

Well, this phrase means that you are talking

about a new member in the team. Okay?

So when you are starting something new, a new project, a

new venture, you need to have people in your team.

And if you have a new member in your team, he

So I can say it’s always good to have new blood. Why?

Because they come up with new and fresh ideas

that help us deal with today’s digital competition, right?

Like, I think today, whenever you see a job ad

or an interview, they want to see whether you are

new blood, are you able to do something new?

So in the new year, are you going to be new?

Are you going to be one of the new blood in your team?

Well, let me know in the comments below.

We also have another Idiom, another phrase which says

you can’t make an omelet without breaking eggs.

How else would you make an omelet?

You have to break eggs.

But let me tell you one thing.

When you’re breaking something, what’s happening?

It’s a sort of struggle.

It’s a sort of difficulty.

But after the difficulty, you get to have fun.

You get to see something new, which is an obligate.

Well, coming to life, talking about using this

and applying it to our lives, it basically

means that it’s hard to start or achieve

something without going through the pain.

You have to break yourself somewhere

in order to achieve something. Okay?

You break the egg, only then you get the omelet.

So you could say the startup idea looks fancy,

but you can’t make an omelet without breaking eggs.

So you have to work harder. Okay?

So you’ve got to go through some pain,

some breaking in order to achieve something nice.

There is another new expression for the new

year, which is to turn a new leaf.

but when you have autumn, what happens?

The old leaves fall off the trees or the

branches, and new leaves come in its place, right?

of what this phrase would really mean.

It means that you are beginning

something new all over again. Okay?

It’s basically you moving from the negative

to a positive change in your life.

I think the new year is a good time to

tell yourself that, okay, we’re going to start afresh.

behind and start something new and positive.

So I would say something like, even though he lost

his job this year, no problem, tom decided to turn

over a new leaf and look for something new.

A lot of you when you enter the new year,

you want to probably change careers, do better in your

What are you trying to do?

You are trying to turn a new leaf.

Now, sometimes in the new year we

talk about the winds of change.

New basically refers to change things that are different

from what you’ve always known them to be.

And therefore wins of change refer to expecting something

that will change in a very major, in a

In a sentence I could say after the

student protests were shown online, you could feel

the winds of change all over the country.

So sometimes a country faces a little bit

of unrest because of some social issues.

And once there was a protest,

I remember there was this protest.

After the protest everything seemed to change.

You could sense that.

You could sense the winds of change in the new year.

I’m sure with new technology we

will witness some wins of change.

So let’s stay tuned for that.

We have another nice Idiom, which

is a new lease of life.

Okay, so a lease is basically an

agreement that you get into, right? A contract.

What is a lease on life though?

Let’s have a look.

Sometimes life is kind to us

after a lot of difficulties.

You see opportunities to kind of come out of

that bad phase and move into a new one.

A lot of you right now are

probably going through that phase, right?

You are looking at yourself move from this place of

being stuck into stepping on to a new opportunity.

And that’s when you can say something like seeing

the business take off after bleeding for twelve months.

Bought a new lease of life to the partners, right?

your work is not taking you too far.

But suddenly something great happens and you

can see a new lease of life.

a new lease onto your life.

Some people use an Idiom or a phrase that

Well, I don’t know how many of you own a dog

or have your own dogs, but that’s kind of true that

some dogs, you really cannot teach them new tricks.

But when you’re talking about New Year Idioms, it basically

means that it is difficult to change old habits.

I know it’s great to want to change and improve,

but the truth is that it is a little challenging.

It is a little difficult.

Not impossible, but a little difficult.

So I would say something like I tried to get

my mother to start using a computer, but she says

Well, my mother apparently is unteachable.

You couldn’t teach her to use a

computer because she’s not used to it.

Okay, so she’s not a Gen Z after all.

So you can’t teach an old dog new tricks.

Well, these New Year Idioms can

be used throughout the year.

They are New Year idioms.

But let me tell you, they are meant

to motivate you into the New Year.

But you can use them whenever you want

and whenever you want to start something new.

I hope you have a great new

year, and I hope you stay safe. Happy holidays. 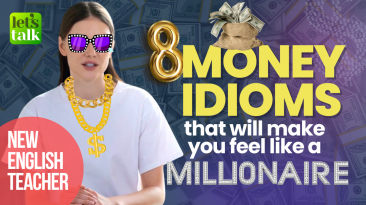 How to talk to any girl without being creepy? Approach Girls Confidently | Dating Advice